Home » Commentary » Arsenal Analysis » Beyond the Senate: The 2014 state losses

Beyond the Senate: The 2014 state losses

Certain people of this country have realized that their true political power lies in their local governments. The states and counties that they reside in have lots of power thanks to the 10th amendment, and by golly they intend to use it to the fullest extent.

This November, not only did the Republicans shellack the Democrats on a national level, they improved their ground game and hit them where it hurts. Jill Lawrence, writing for Al Jazeera America, recaps: 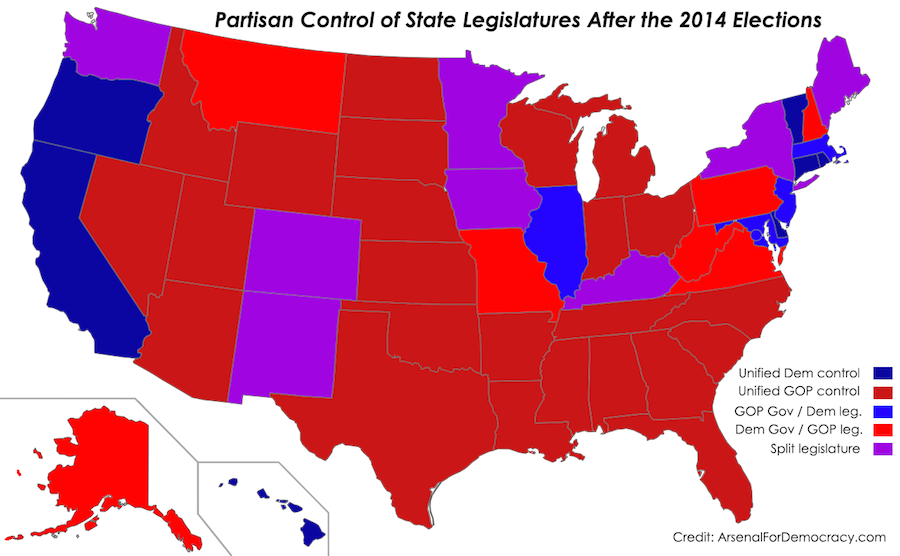 The significance of these gains is two-fold. First, implementing policy on a national level is difficult when it means communicating and negotiating with Republican dominated state houses. Landmark legislation like the Affordable Care Act depends on cooperation of the states. 25 states didn’t expand Medicaid as a part of the ACA, essentially making the law useless for the low-income uninsured.

Similarly, any hope for increasing the minimum wage in individual states rather than nationwide will be impossible in states with the Republican held legislatures. State Republicans that continue to base their decisions on party politics instead of the needs of the people are sure to face repercussions later down the road, but for now they have other intentions.

Which brings me to my second point. These newly elected Republican legislatures and governors will no doubt pass questionable legislation, as they have done in the past. In 2013, North Carolina tried to establish Christianity as their state religion, until someone realized that would be totally unconstitutional. Michigan lawmakers extended gun owners the right to conceal and carry in daycares, but it was vetoed by the Republican Governor a few days after the Sandy Hook shootings. And Tennessee attempted to pass a bill that would cut low-income families’ welfare if their children received poor grades in school.

State legislatures fly under the radar of most people, but local advocates have been able to push their agenda through these state houses. Based on their recent track record, the new Republican majorities will inevitably bring a fresh onslaught of anti-abortion laws to states that have already restricted a woman’s right to choose, as well as to new states. Laws that would clearly never make it through a national Congress, are snaking through the states and slowly but surely making it more difficult for a woman to have fair access to an abortion.

Issues like this are where some people have realized their true potential as voters. Local laws reflect local attitudes. And despite the Supreme Court’s ruling on Roe v. Wade, local attitudes will continue to work towards limiting, and potentially barring, access to legal abortions.

So as concerning as it may be for Democrats that they lost control of the U.S. Senate, focus should instead be on the amount of power Republicans now hold in the states. And most importantly, how they intend to use that power.