Yesterday we spent the day hearing from governors and other politicians, in both parties, lie about the terrorism “risks” of refugees being settled in their states.

It’s an exaggerated concern fomented by cynics and people utterly unfamiliar with the screening process. If terrorists want to attack the US they will seek alternate entry (e.g. illegal entry or various visas with less screening) or they are already here. They aren’t coming through the refugee screening process which barely lets anyone in as it is and requires extremely intensive interviews.

I knew all of that well before this latest controversy based on what I had already spent months researching for The Globalist.

It is very difficult, as this new Huffington Post article explains, to become a refugee in the United States and the vetting is detailed. There are basic identity checks and biometrics, then there are in-person interviews in the staging-area countries, then there are health tests, then there is verification of biographical information, database cross-checks, and if you are approved there is supervision and guidance by the government upon resettlement. It’s a very long process.

The odds of a random jihadist making it through that process without breaking or being caught are basically nil, which is why they would find a different way to get here, if they really wanted to.

The European project was born in the ashes of World War II and its own massive refugee crisis.
Guest Post by Etienne Borocco of France.

On August 28, 2015, 71 corpses were found in a truck at the Austrian border. They were refugees, mainly from Syria. Days later, after the latest ship full of refugees sank in the Mediterranean, images seen worldwide showed the drowned victims, including a small child. All were trying to escape a horrific war, which has reached a death toll greater than 200,000 casualties after a 4-year conflict.

Syrians are not alone, however. There are a lot of refugees from Eritrea, which is sometimes called “Africa’s North Korea.” Or from South Sudan, prey to a merciless civil war. Or from Afghanistan, Somalia, Iraq, and so on…

All these refugees are qualified to a granted asylum because the situation is terrible in their home country. However, they cannot apply to asylum in a European embassy. They must first travel illegally to apply. This trip is dangerous and creates a big opportunity for unscrupulous human traffickers.

The latter can be grateful to the European countries for their flourishing business. The situation on the European side results from an absence of agreement for a common policy to host refugees.

Moreover, the Dublin convention has serious pitfalls. The first Member State where fingerprints are stored or an asylum claim is lodged is responsible for a person’s asylum claim. The countries at the border of the EU are then overwhelmed.

160,000 refugees landed in Greece between January and July 2015, to say nothing of those who came in the previous two years. This figure alone is already comparable to the Irish exodus during the Great Famine in 1847. In that era, 215,000 Irish immigrants fled to the United States.

Recently, Germany decided to not enforce the Dublin regulation anymore. The German government decided to grant asylum to all the Syrian refugees regardless of which country of the Dublin-regulation area they landed in first .

On the other hand, Hungary has recently built a wall at the border with Serbia, and Austria seeks to control its borders more strictly. The whole European project is threatened because governments are tempted to act alone without coordination.

The irony is the European project was born from the ashes of the Second World War. During this period, a lot of refugees fled conflicts. French citizens crossed the borders with Spain, where they were illegal aliens. Francoist Spain used to deport them and a great part was directly delivered to Nazi Germany. They were promised to a certain death.

However, those who managed join the Free Forces participated to the French liberation. In the Netherlands, the “England-Voyagers” (Engelandvaarders) took makeshift boats to cross the North Sea to England. Some famous Dutch resistance members like Erik Hazelhoff Roelfzema were part of the “England-Voyagers”.

London also hosted the central command of the French Resistance directed by General de Gaulle, as well as several other governments-in-exile of Nazi-occupied territories.

Several other countries hosted significant numbers of refugees from Axis countries during the war. Many wartime refugees risked and lost their lives crossing borders or the Mediterranean to flee. When the borders were being redrawn after the Axis surrender in 1945, millions more people were also displaced. It was in this context that the European project began.
Read more

Lots of global criticism in the past couple weeks (at long last) of the right-wing government in EU member Hungary for fostering a deeply hostile environment against incoming refugees — and enacting hostile policy.

Police were caught throwing food over a fence into a detention camp to watch refugees scramble miserably for it. A Catholic bishop in Hungary openly rejected the Pope’s appeals for compassion. A camerawoman tripped a Syrian child intentionally; she was affiliated with a partisan media operation advocating Jobbik, the fascist opposition party that is widely viewed as the main competition to the ruling right-wing populist Fidesz party.

Hungarian authorities also packed trains full of people and sent them on to Austria and Germany, unilaterally and against European Union policy. This last move finally prompted the social democratic Austrian Chancellor, Werner Faymann, to publicly shame his Hungarian counterpart, Prime Minister Viktor Orbán…strongly implying he was behaving like a Nazi:

“Sticking refugees in trains and sending them somewhere completely different to where they think they’re going reminds us of the darkest chapter of our continent’s history.”

Bit of a shame it took this long to call this increasingly authoritarian right-wing regime by its true colors.

Photos also emerged this week of the long-awaited “border fence” Hungary’s Orbán had ordered the military and prison inmates to erect as rapidly as possible.

While these numbers sound impressive, the truth is that they do not go far enough in aiding the 4 million refugees who have fled the Syrian Civil War. Countries closest to Syria have absorbed the most refugees; Turkey has accepted over 2 million alone and Lebanon has accepted well over 1 million.

Of course, accepting millions of refugees has taken a toll on these countries, themselves developing nations, and as resources diminish, refugees have begun to look for what’s next. Many refugees have set their sights on Europe, where many empathetic citizens have welcomed them but where leaders have remained startlingly silent on the emerging humanitarian crisis. More than 2,400 refugees have died trying to cross the Mediterranean Sea into Europe.

In the face of such an alarming need, this is no time for small actions. Yet, the 10,000 immigrants President Obama is prepared to accept represents way less than what America can and should do to help alleviate the suffering of Syrian refugees.

In May of 2015, a group of fourteen Democratic Senators asked President Obama to allow 65,000 Syrians to settle within the United States in each of the next two years, following a recommendation from the United Nations High Commissioner for Refugees (UNHCR). However, of the 16,000 refugees that have recommended for resettlement in the US by UNHCR, the US has only taken about 10%.

The Republican party also finds itself divided between their moral responsibility to aid refugees and their concerns over national security, a divide sure to make itself known at next week’s GOP primary debate.

While accepting 10,000 Syrian refugees into the US is significant, and especially significant to those individuals and families who build a life in here under this initiative, it is also insufficient and should not be the end of our country’s discussion on how to provide aid to Syrians amidst this unspeakable humanitarian crisis. 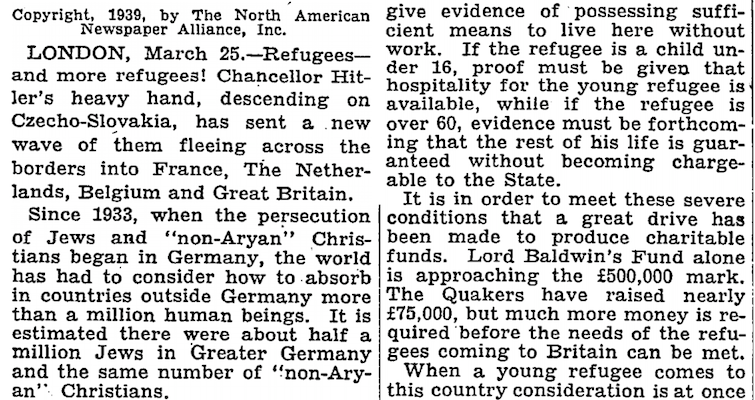