A claim by public worker unions that they have a right to full pension funding challenges the core of New Jersey’s constitutional structure, attorneys for the state said in a brief filed Friday.

I find odd the silence from Republicans (and everyone else?) as Gov. Chris Christie’s attorneys appear to challenge the fundamental supremacy of the rule of contract law that holds together much of Anglo-American jurisprudence and property law.

To my untrained eyes at least, they’re making some pretty bizarre constitutional arguments (mostly centered on state balanced-budget requirements and the like) to prove that contention.

In principle, it sounds similar to the arguments being raised (on the issue of constitutional tax caps) by moderate tax reform advocates, about not binding future legislators by decisions of current legislators/voters — except that in Colorado’s case, they’re challenging the validity of certain state constitutional provisions (which took away the legislature’s effective authority to raise taxes at all) under the U.S. Constitution, rather than (as New Jersey is doing) trying to void contracts because they conflict with stringent state constitutional requirements.

Moreover, even if the New Jersey contracts are indeed unconstitutional, issuing bad-faith contracts is a pretty big problem as far as governing strategies go…and also tends to undermine the strength of contract law in the country.

I don’t have much else to add on this topic at the moment, but I’m flagging it now in case it develops into a bigger story later.

On Friday, Burkina Faso’s President Blaise Compaoré resigned from office after 27 years in power and a week of escalating protests (see our background report). He appeared to hand power to General Honore Traoré, head of the Burkinabé Army, his former aide-de-camp, and called for elections within 90 days. While the elections point is in line with the Constitution, the transfer to the military is not, nor was the subsequent dissolution of the legislature.

Update II: Part of the problem appears to be that the position identified in the constitution as the successor does not exist due to an ongoing fight over the actual creation of a Senate required by amendments to the constitution.

According to the Constitute Project’s English translation of the Constitution of Burkina Faso, the resignation of the country’s President should result in the automatic elevation of the President of the Senate to acting president until a special election can be held 60-90 days later:

Article 43
While the President of Faso is incapacitated in a temporary manner from fulfilling his functions, his powers are provisionally exercised by the Prime Minister.

In case of vacancy of the Presidency of Faso for any cause that may be, or of absolute or definitive incapacity declared by the Constitutional Council referred to [the matter] by the Government, the functions of the President of Faso are exercised by the President of the Senate. It proceeds to the election of a new President for a new period of five years.

The election of the new President takes place sixty days at least and ninety days at most after [the] official declaration of the vacancy or of the definitive character of the incapacity.

The Acting President also does not have the power to dissolve the legislature and hold new legislative elections.

The Army also may be suspending the Constitution, according to various announcements from competing sources. Colonel Zida, the Army Spokesman, has already claimed the termination of the Traoré transitional government, in less than 24 hours, and says he is now in command.


Update for Clarity: Burkina Faso had a unicameral National Assembly between the 2002 amendments and the 2012 amendments that re-established an upper house called the Senate on paper, but it was never executed. The post-2012 French version, with amendment notes, is here. Obviously it’s hard to have the Senate President take power without a Senate.

Or: Why President Obama must deal with the torture issue now

It got really cliche when supporters countered critics of Obama’s bold agenda by saying the president was capable of walking and chewing gum at the same time.

Even some people in the administration kept saying that. If he can work on Iraq, Afghanistan, the economy, and health care all at the same time – since he does have all these people working for him – it seems theoretically possible to do some other things simultaneously as well.

Robert Gibbs, the press secretary, says Obama is focused on “looking forward” and not back, which is supposed to be a good enough explanation for his disinterest in following the law and investigating and prosecuting those in the previous administration who authorized or carried out torture.

If Obama were the only person in charge of doing everything at once, this might be a reasonable thing to say. But he’s not. He’s the head of a gigantic administration (and he could, for that matter, leave it entirely up to the U.S. Dept. of Justice, like he’s supposed to, and not worry about it). That means it’s possible for the administration to be looking forward and back at the same time.

Like Janus, the Roman god of doorways and the namesake of the month of January: 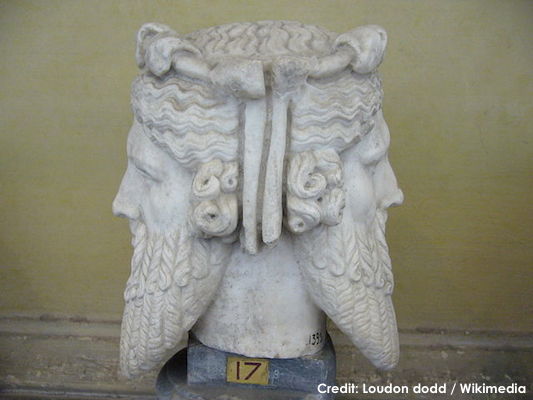 But on a serious note… think about it this way: If people committed crimes in the previous administration (and the evidence is overwhelming that they did), then they should be prosecuted. Because what sort of signal does it send to less-than-honest people in current and future administrations? If we prosecute, it tells people they can’t get away with it just because they’re out of office. If we don’t prosecute, it tells them that laws don’t mean anything because everyone will be ready to move on and “look forward.”

It doesn’t make sense to me that we should just “look forward.” That’s the same argument that Gerald Ford used in pardoning Nixon, and it pissed everyone off and may have cost him the 1976 election. Sure, it’s a distraction and it’s politically draining, but if we don’t hold up the law, does the law mean anything? Why bother writing laws if we never plan on enforcing them?

If we always cower because we don’t want to look like we’re politically motivated in carrying out the law, then it encourages further law-breaking. That’s not a slippery slope argument, it’s just reality. There are bad people out there who want to do illegal things, some of them will break the law anyway, but some of them will be stopped because they know there will be consequences.

Ta-Nehisi Coates has been looking at this in a different light, and he also makes these points and others better. Particularly, he suggests that there is a double standard for how the law gets enforced:

We don’t get to pick and choose.