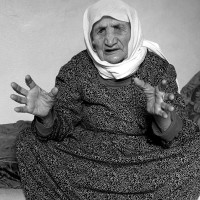 Learn the story of Sabria Khalaf and how you can help:

She is a 107-year-old refugee of the Syrian civil war. She is quite likely the world’s oldest refugee. She now lives precariously in Greece. Sabria would like to be reunited with her family in Germany. This seemingly easy feat, however, is being frustrated by EU immigration policies. Please join us in urging Chancellor Angela Merkel to let Sabria into Germany.﻿